Here is the recipe for today’s pie Cheddar Pear Pie 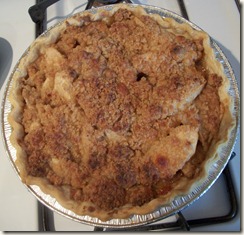 And the VERDICT on yesterdays Double Layer Pumpkin Cheesecake

I would give it a 5 stars for ease of preparation it was super fast and easy to make.  I also loved it because it the top didn’t crack at all while baking (yeah!).  This pie was suppose to go somewhere else but for reasons beyond my control and to my husbands delight it ended up being our family night treats.    My family LOVED it they all gave it 5 stars for taste and even for me a non pumpkin pie fan it was surprisingly good it’s very mild on the pumpkin flavor.  I would probably make this again and if I did make it again I would probably add a bit more cinnamon, nutmeg and cloves.

So are you thinking what I’m thinking cheddar and pears in a pie??  Well all I can do is give it a try and see what happens.

First thing you need is six cups of peeled and sliced Pears. Then you mix your brown sugar, cornstarch, and cinnamon. 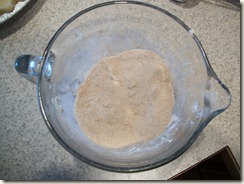 Mix it into the pears and place your pears into your pie shell. 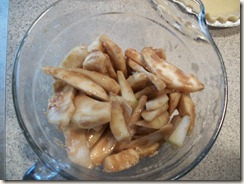 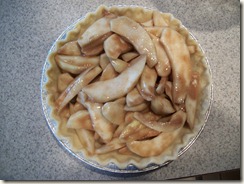 Next you make your crumble topping.  This is where the cheddar cheese comes in.  I thought using white cheddar might be visually more appealing.  So you mix your cheese, flour, brown sugar and butter until you get course crumbs. 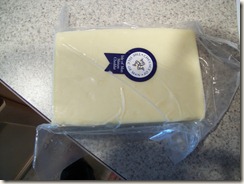 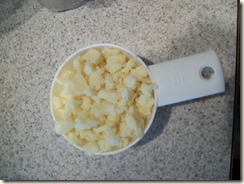 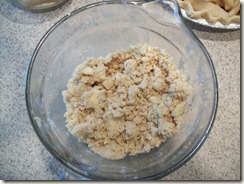 Place the crumb topping on the pears and bake at 400 degrees until it’s nice and brown on the top. 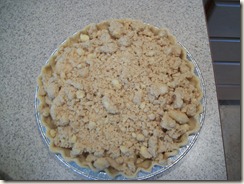 It looks pretty doesn’t it?? Well that’s about the only good thing about this pie. 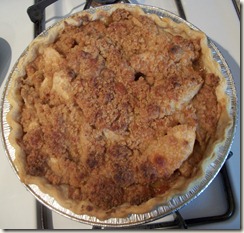 IT WAS TOTALLY DISCUSTING!!! I can’t in good conscience give this pie to anyone.  I always make a tiny little pie for our family (I’ll post pictures of the tiny pie pieces sometime they’re hilarious) and one bite of this nastiness is all anyone needs.  Maybe you could eat it slathered in caramel sauce and vanilla ice cream. It even SMELLED NASTY while it was baking.  Granted I did follow everyone’s suggestions on allrecipes and used sharp cheddar so maybe if you went with something more mild it would be better or you could follow my suggestion and LEAVE THE CHEESE OUT OF IT ALLTOGETHER!  Anyway I give it a 1 star for taste and 4 stars for ease of preparation and  a big thumbs down to wasting all my yummy pears.

So I don’t actually think that my opinion is the only one that counts(it got an average rating of 4.5 stars on allrecipes) so if anyone is brave enough to try this recipe and gets great results leave a comment and tell us what you did!