and the verdict on yesterday’s Cranberry Streusel Pie.  This pie was super easy to make and I would give it a 5 Stars for ease of preparation. As for taste we only have our one bite mini pie to judge from but we all thought it tasted pretty great, add a scoop of vanilla ice cream and I think you have a real winner.  We would give this pie a 4 Stars for taste.  I won’t have any other opinion to go by as this pie is destined for someone who won’t be able to give it a verdict.

Let me say first that my 8 year old daughter helped me make this pie for a girl scout project so we kind of forgot to take a lot of pictures.

First you pile your apples in an unbaked pie shell.  The original recipe doesn’t call for cinnamon but since we were giving this to someone for their Thanksgiving dinner we decided to add cinnamon.  Then you add a lattice crust to the top of this pie.  (sorry no pictures) 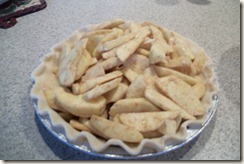 Then in a saucepan you make the syrup to pour over the top.  It has butter, white and brown sugar and water it says to simmer it for 5 minutes but I would recommend not doing that.  Just simmer it until it’s thick it won’t take long. 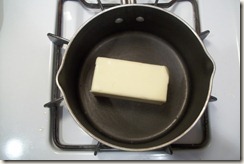 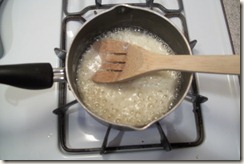 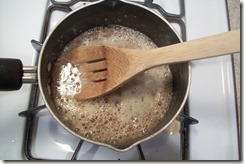 Then you pour the sauce over the lattice crust and then bake it at 425 degrees for 15 minutes and then 30 more minutes at 350 degrees. 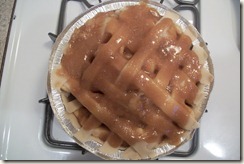 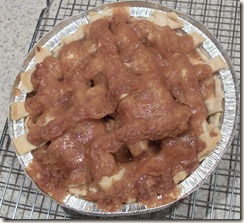 This pie gets a 4 stars for ease of preparation.  As for taste we would give it a 4 stars as well.  The crunchy topping on the crust was really cool and unique.  I think this recipe is a great starting point but it could use a few tweaks like cinnamon.