Maybe the YUMMIEST thing EVER!

The other day our friends had us over for dinner and I volunteered to bring something, I was having a hard time deciding what to bring. I was waffling between rolls or a dessert.  So instead of choosing between the two I combined them and possible made the yummiest thing EVER.  (not to pat myself on the back or anything)  Ok, so I only made Fancy orange roll pull-a-parts but seriously they were scrumptious.

The pictured really doesn’t do it justice. 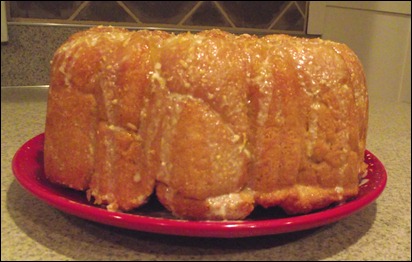 This is how I did it.

First you’ll need some dough I used my  PLEASE RESTRAIN ME! Dinner Rolls that recipe will give you more than enough dough, you could actually  use only 1/2 the batch.

After I had made the dough AND after it had risen the first time I punched it down and kneaded it a few times (I did that right in the bowl).  Then I ripped off little chunks of dough and rolled them in melted butter then I rolled then in a combination of sugar and orange zest. About 1 cup of sugar to the zest of 1 & 1/2 oranges (depending on their size).  Then I layered them in my bunt pan and sprinkled it with sugar in the raw.  I filled the bunt pan up about half way. I let it rise again for about 30 min.  Then I baked it at 350 degrees for about 34 min.  After it was done I glazed it with some vanilla frosting (1/4 cup?) that I thinned by adding orange juice and more zest.

VARIATION:  My husbands favorite citrus fruit by far is limes.   His birthday is on Friday and I think I’ll be making him the lime version I can’t wait to see how it turns out.

So yummy! Thanks for posting the recipe!

Oh boy, I love orange rolls. This sounds even better than monkey bread. I'm starting a new linky party on my blog this Saturday called "Sweets for a Saturday." I hope you'll be able to join in.

Orange rolls are the best! This looks like it would be so good with hot chocolate.

Oh my goodness! I nearly licked my computer screen. YUM!

That does look super yummy. I make cinnamon rolls once in awhile, but I never made orange rolls. I need to try this.

That looks delicious. If I didn't have to work in the morning I would totally make it for breakfast. Perhaps some time this week.

YES! I've been having a fetish with orange flavored goodies lately and this recipe will add to my hankerings. Thanks for sharing, you ROCK!

This looks yummy! I'm sure the orange zest makes it divine!

I love the name of your blog :) Your orange pull aparts sound wonderful too! I've bookmarked them, and also your dinner roll recipe - yum!

You might like the new foodie blog hop I am co-hosting on Fridays called Feed Me Tweet Me Follow Me Home. It's a great way to find new followers and new blogs. Hope to see you there this Friday!

lovely! it reminds me of my mom's monkey bread recipe. i'll have to try this :)

I am making this one asap! What a perfect way to start a party :)
mickey

I just know my boys would love it! I'm your newest follower :)

Looks AWESOME! I can see why this would be a huge hit - I know it would be with my crew! :-)

Hi Jami,
Your Pull Apart Bread looks so gooey and has goodness just sitting there waiting for me. I wish I could just start pulling right now. Thank you so much for bringing it over to FULL PLATE THURSDAY for us to enjoy and please come back!

I featured your recipe on today's Yummy Thursday over at Humble Homemaking! Thanks for sharing such an inspiring and delicious dish. Feel free to click on the link below to check it out and collect your feature button for your blog. Have a wonderful day! :)
Humble Homemaking