My husband has old fashioned oatmeal with honey and frozen blueberries every single morning for breakfast.   So when I was looking through a cookbook and came across this recipe, I thought I would make it for him for a few reasons.

1. His breakfast would already be ready for him in the morning. &

2. I thought maybe it would be nice to try a new flavor. 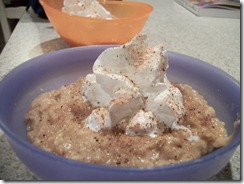 FYI-  ** THIS MAKES WAY TOO MUCH OATMEAL FOR OUR FAMILY OF 7. SO YOU MIGHT WANT TO SCALE IT DOWN **

Layer the apples in the bottom of your slow cooker. 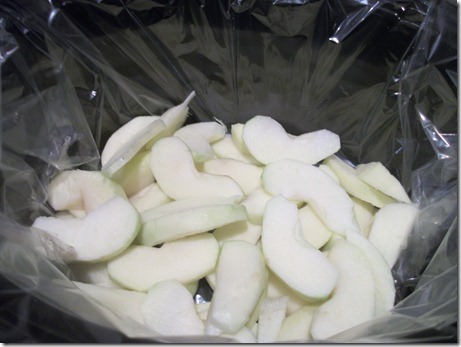 Sprinkle with brown sugar, nutmeg and cinnamon.  Dot with butter 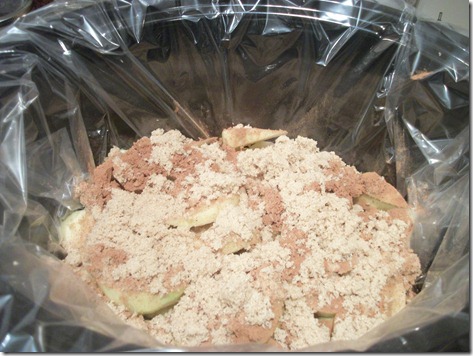 Layer oatmeal over the fruit. 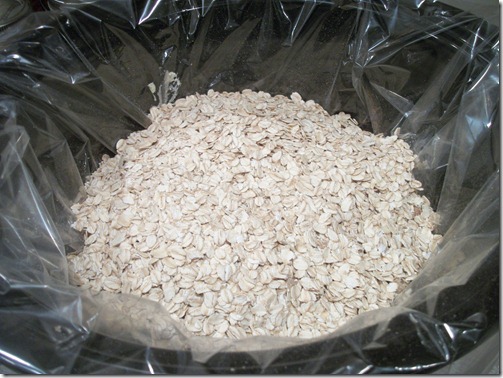 Pour milk over oatmeal and stir together until well blended. Cover cook on low for 6 hours. Then wake up to the smell of baking apples. So yummy. 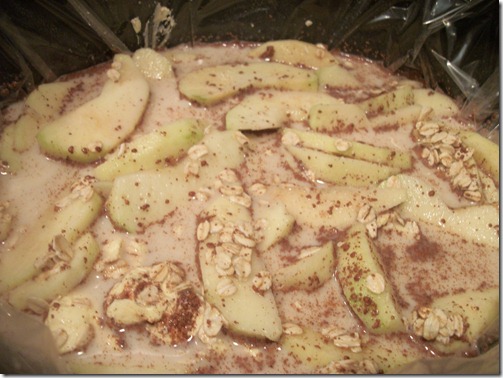 I served it with a bit of whipped cream and sprinkle of cinnamon and sugar. 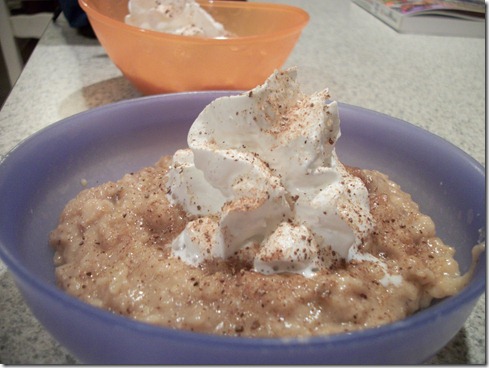 I was super YUMMY!  The only thing that my husband didn’t like about it was the texture, since he is used to having old fashioned rolled oats every morning he likes his oatmeal to have some bite to it.  This oatmeal cooks so long that it is more like instant oatmeal in texture. But the flavor is so great! But like I said it also makes way to much, when I make it again I would try making about 2/3 of a batch.

My new favorite oatmeal is steel cut oats. If you like a little bite to your oatmeal it is SOOOO good!!!

What ist that plastic in your crock pot? Did you forget to take your new crock pot out of its packaging? OR maybe you have a secret weapon for keeping it clean? Do tell.

I'm shocked Sharon, knowing you that you don't use Crock Pot Liners. I LOVE THEM!! You can find them by the sandwhich / Ziplock bags. AND I resently used one to roast a chicken in, in my OVEN. I seriously love them. YOU just lift the bag out and throw all the mess away...pure awesomeness!

I made this last night for breakfast this morning and oh-my-goodness it's so good! It tastes kind of like apple pie. I refrigerated the leftovers for reheating (just add some water and microwave for a couple of minutes) so I now have breakfast ready for an entire week. Thanks for the great recipe!

What a great breakfast to wake up to, I am putting this on tonight before I go to bed. Thank you so much for sharing with Full Plate Thursday. Hope you are having a great week end and come back soon!
Miz Helen

Congratulations!
Your recipe is featured on Full Plate Thursday this week. Hope you are having a great week and enjoy your new Red Plate!
Miz Helen

This sounds like a wonderful breakfast to wake up to!! YUM!!! I'm here from Miz Helen's.