So today I’m watching my friends kids for her while she is on a little vacation.  That means I have 9 kids running around here and I thought it would be a perfect opportunity to use them as guinea pigs.   So while I was making bread this morning I decided to turn my Apple Cinnamon Instant Oatmeal Bread into Caramel Apple Cinnamon Rolls. 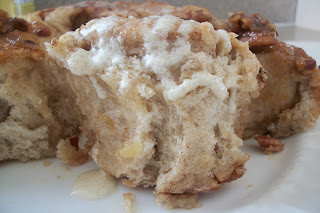 This is what I did.
First you’ll need some dough I used this recipe that I just made up today, but you could use whatever your favorite recipe is.
Roll the dough out like cinnamon rolls. (Incase you didn’t read the recipe the little chunks in the dough are dried apples) 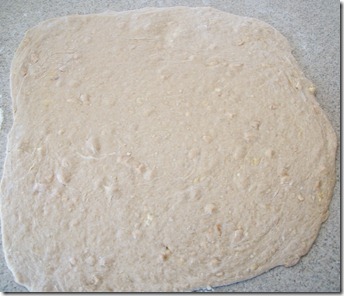 Slather it with butter 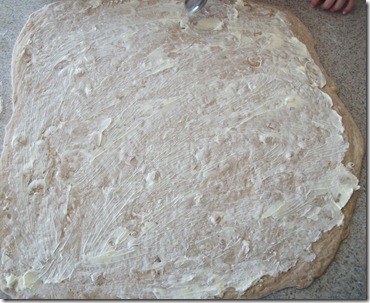 Then I peeled 1.5 apples but I should have used 2. 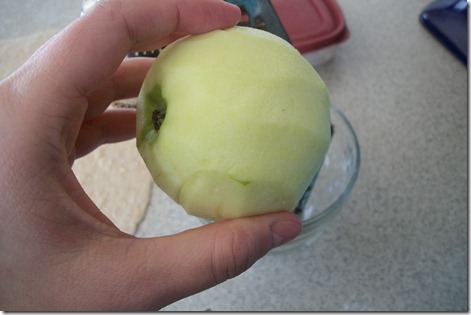 Then I grated them 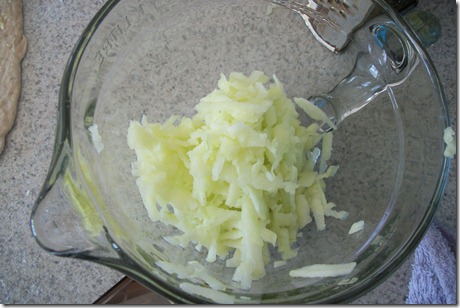 and added some cinnamon, sugar and cornstarch. 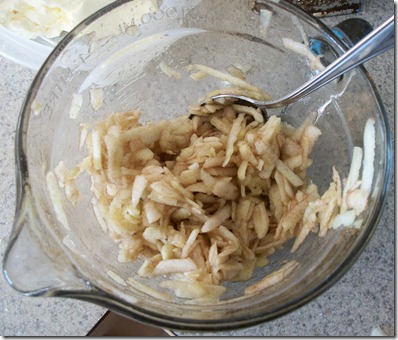 Then I sprinkled the grated apple over the dough and added a little bit more cinnamon and sugar over the top of it.  I would have preferred to use brown sugar but I was all out

then I rolled it up. 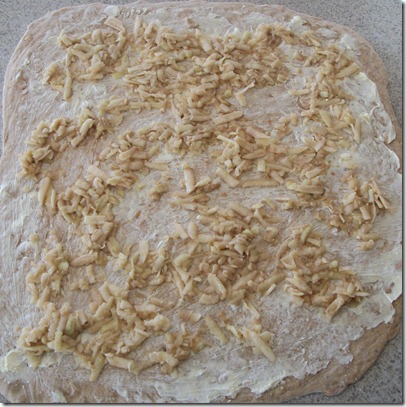 I would have also like to sprinkle brown sugar in the bottom of the pan before I placed the cinnamon rolls down but because I didn’t have any I used caramel sauce instead, oh and a few chopped pecans. 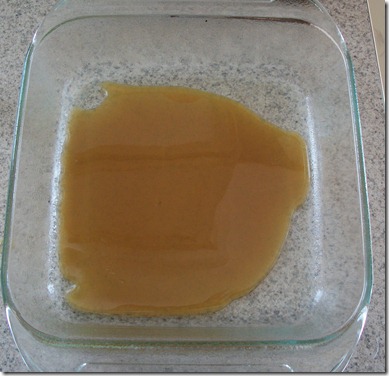 in the other pan I made a crunchy crumb topping kind of like an Apple Betty and sprinkled that over the top. 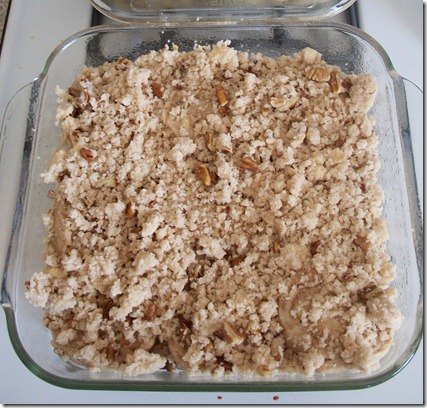 Then I let them rise for about 30 minutes and baked them at 350 degrees for about 28 min or until they felt done.  Make sure you oven rack is set below the middle of the oven!
Remove from oven and dump out on a plate.  ENJOY!!
Caramel Apple Cinnamon Rolls 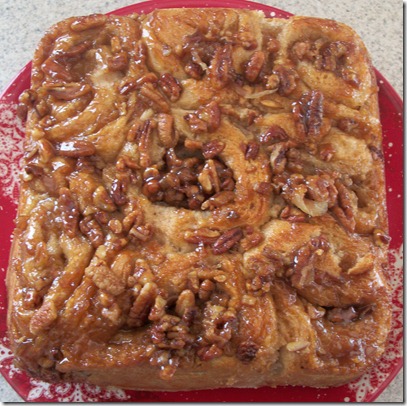 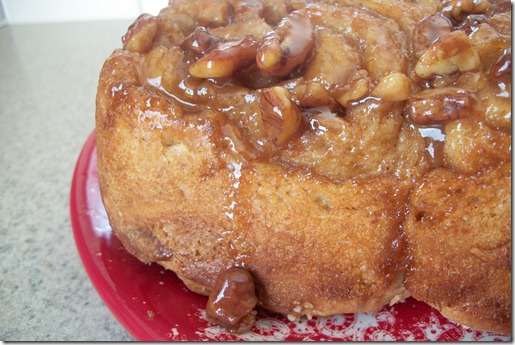 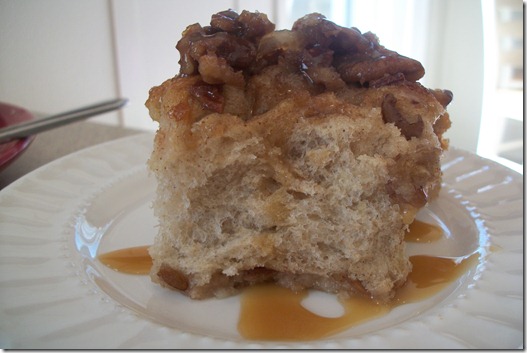 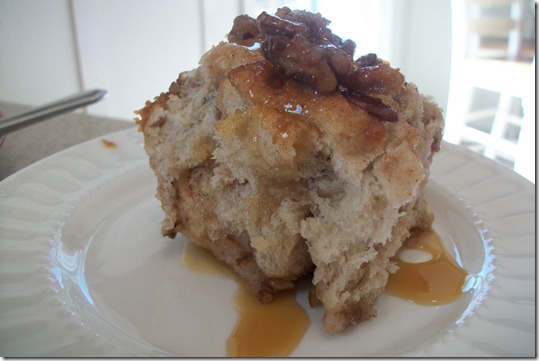 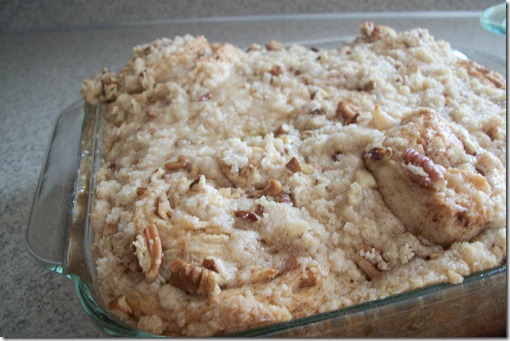 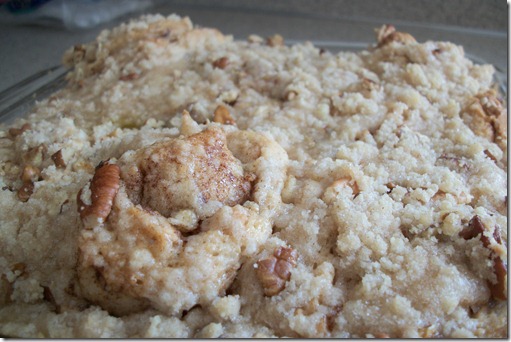 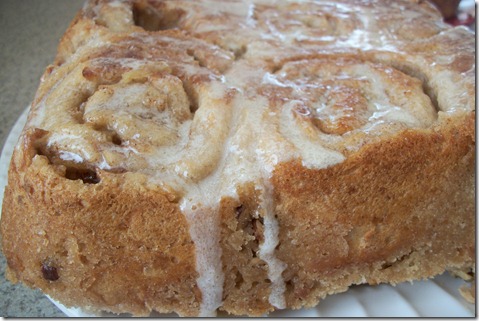 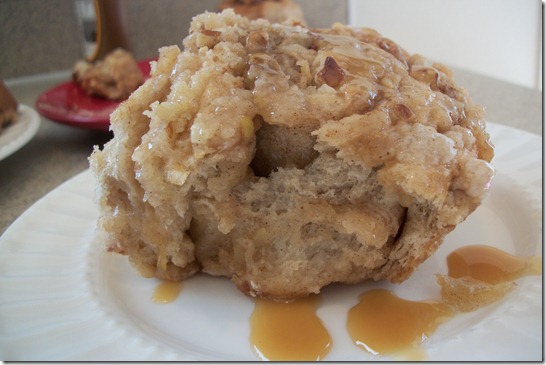 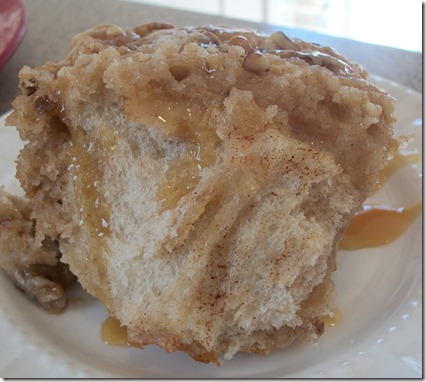 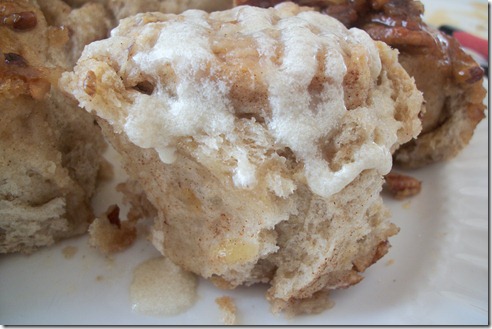 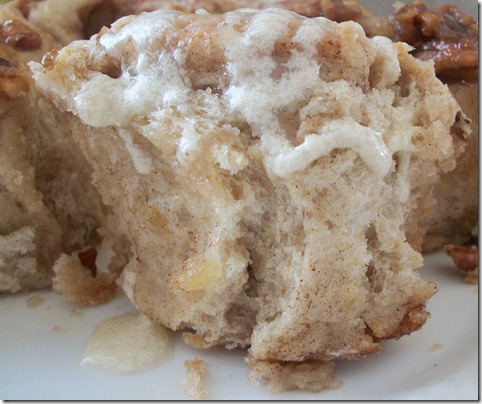 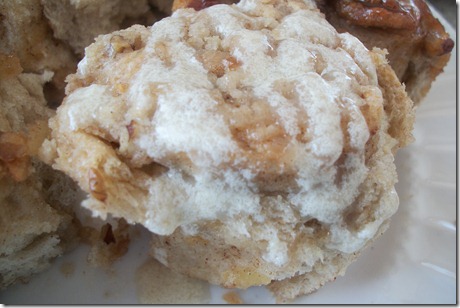 They must have been good because they didn’t last very long!
at 2:01 PM

Yummy! I found you on Lil Luna!

Holy, Moly....think I gained a pound just drooling over the recipe!! These look to-die-for. We make homemade cinnamon rolls when we vacation...may have to try these this year!! Yummers!!

These sound sooo good. I just started making cinnamon rolls this past year and have never fentured from just plain cinnamon rolls. Now that I have it figured out, it's time to start experimenting. These might be first on my list.

Wow, these all look delicious! I'm saving the caramel apple cinnamon rolls to give it a try.

I'm putting in my formal request for these bad boys to show up at the family reunion! :) These look amazing!!!

That looks great! I don't know which way I'd choose...caramel maybe? Both look yummy!

Hi Jaime,
Oh my goodness...I am drooling I must have some of these amazing rolls. The photo's and your recipe are amazing! Thank you so much for sharing with Full Plate Thursday and hope to see you next week!

Very delish. I love any thing with apples. Came over from Sassy Sites.

I wish I would have read this earlier this am. I just made cinnamon rolls for breakfast! Next time I am doing this. SO excited! I am visiting from foodie friday and am your newest follower! Happy FRIDAY!

Oh my gosh these look AMAZING!! wow. :)
I'm a new follower from the Free For All blog hop!!I blog at Work From Home Star.

You are much braver woman than I am to be cooking with 9 kiddos running around. Those cinnamon rolls look fabulous! I am going to have to save this since I am always looking for delicious breakfast ideas :)

those look terrific. I'd love it if you'd share them with a link over here at my monthly sweet rolls linky party? would you please!

i'm addicted to sugar and cinnamon and all things sweet, i know those wouldn't last a day at my house either :)

YUMMY!! Thanks for linking up to Foodie Friday! If you haven’t already, make sure to pop back over to enter my GIVEAWAY!!! Entries must be by Sunday evening and a winner will be picked Monday!!

Ohhhh, that looks incredible. I know what I'm making for breakfast this weekend! Thanks for the recipe! I can't wait to try it out.

I would have eaten several of them. What a great change up on cinnamon rolls and so many yummy options. Your commentary is funny too! Joni

Wowzers! Those look amazingly delicious!!! I have a feeling that i might need to try this recipe out!!! Pinning it right now so I can remember where it is:-)

Woo, those look delicious. Have you ever tried making brown sugar at home? I always forget to buy brown sugar so I keep a jar of molasses in the pantry and you just add a spoonful to about a cup or two of sugar and then stir it up for a min. or two. Easy and super fresh brown sugar anytime you need it. :)

I'd love for you to add this to the Hump Day Hoorah link party. I hope to see you there! :)

Congratulations Jaime,
You are featured on Full Plate Thursday this week. Please stop by and pick up your Red Plate, enjoy!

Yum...I have to have this recipe! beautiful blog...I am your new follower!

Your blog is making me FAT!!

I am drooling all over my keyboard! Thanks for sharing these this week!

BTW, I featured this today! Hope you'll stop by and grab a button and link up again this week!

By running out of brown sugar and using carmel you created a new recipe. It looks soooo good!!! Wow and you had 9 kids running around. I'm totally impressed! Katharine

This is a perfect recipe for this time of year. They look amazing!

Lady Behind The Curtain said...

This recipe looks amazing! Join in on the fun and come over to Cast Party Wednesday tomorrow to share this tasty recipe with us.
Thanks,
I hope to see you there!
http://ladybehindthecurtain.com

this looks so good! wow! Thanks so much for linking up to Tuesday Talent Show! I would love to have you stop by and link up again tomorrow with more great projects!
-Nikki
http://chef-n-training.blogspot.com/