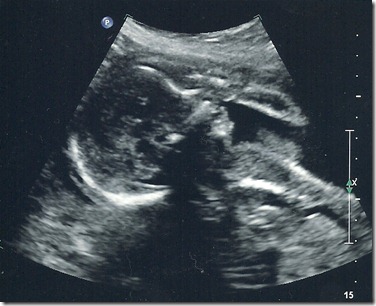 So yesterday we spent another LONG day @ the U of W, MICC.  There are some seriously long waits to talk to a doctor at that place.  I started off the day by dropping 3 different kids off @ 3 different people’s homes around 11:20 a.m. (the older girls were at school and rode the bus to friends homes afterwards)  then I headed to Bellingham to pick Cameron up from work and head down to Seattle. Our first appointment was in radiology @ 2:00 p.m.  We were a little early but check in anyway, and they got to us right away, before 2:00 even.  The ultrasound was pretty fast it only took about 10-15 min.  It showed that the hydrops hasn’t gotten any better

, but it also hasn’t gotten any worse

.   He is still growing at an appropriate rate without the edema he is the normal size for a 24 week old baby, and his heart beat is still a normal 135 bpm.   So we get out of radiology really quickly and our next appointment isn’t until 3:30 pm.  We take a little walk around the hospital until 3:00 and then go check in at MICC.  Then we wait, for 2 hours and at 5:00 are are finally taking into an exam room.  The nurse checks my blood pressure and all that stuff, and some hospital apology person comes in and apologizes profusely and gives us free parking for our long wait.  After she leaves a social worker comes and talks to us for about 15 min.  That was really, really hard, but good.  We have a better understanding of what to expect, what we can ask for, and what kind of things we need to be thinking about if he is stillborn, or if it looks like is life will be brief.  Man, that was a hard conversation to have, but I know it’s something we might be dealing with, and I feel better knowing, than not knowing.   So finally the doctor comes in and around 5:40 p.m. and we come up with a plan that makes me feel like we are giving this baby his best chance at life.   First she explains to us about what a healthy babies prognosis would be starting with birth at 24 weeks (about 21% survival).  Then she works her way up to about 28 weeks, where the prognosis is much, much better, and she says they pretty much don’t expect to lose a baby who is born at 28 weeks in 2012. But now add on top of that, that our baby is not a healthy baby and that he is hydropic, and hydropic babies can be hard to intubate because of all the swelling.  So she then asks us what we want to do, and I have no idea what she means, so I ask “what are we deciding?” Then she explains that she doesn’t know what kind of a sick baby he is and she can make better choices about his care if she can monitor him for an extended period of time, and she needs to know from us when we want that monitoring to begin.  After discussing it a bit more we decide between 27 and 28 weeks.   So on March 24th, I’ll go down to Seattle and he’ll be monitored for 12 –18 hours and I will get the first dose of a medication that will help his lungs.  After that is over and she can see how he is acting over an extended period of time, we will make some more choices.  From spending that moment on in the hospital in Seattle with him being constantly monitored, to me physically moving to Seattle and coming in 3 times a week for extended monitoring, until it gets to a point where delivery is his best option.  There is also a procedure she can try that removes some of the fluid around his lungs, but that is really risky and not something we are going to try yet, but maybe if he gets older.  Now we really, really need him to make it to 27 weeks 4 days, roughly 3 weeks and 2 days away.  It doesn’t sound like a long time, but with a baby who is as sick as our baby is,  it is a long time and it will feel like a year I’m sure.  We realize that our little guy has some HUGE obstacles still to overcome, and even if he does make it to birth, he will still have a hard, hard fight ahead of him, but birth is a good thing and it does increase his survival rate (depending on how many weeks he is at delivery).  Right now he has about a 10 –20 % percent chance of survival, but if he can make it to birth and past the first 24 hours his survival rate goes up to 50 –60 %.   And I feel like if he is being monitored very closely then he will have the best chance at a live birth.   So we are praying he can make it to birth, and that, that birth can happen sometime after 30 weeks.  This is kind of the simplified version of everything, there are so many other things that I could go into but don’t really want too.  So what are we going to do if I have to spend the last weeks of my pregnancy in the hospital or living in Seattle?  I have no idea, we are trying to come up with a plan for the other kiddos.  Cam’s parents just left on their second mission (Ukraine) and my mom can’t come until May.  I’m sure we’ll work it out somehow but it gives me a head/heart ache just thinking about it.

I'm sure everything will turn out fine and I sincerely wish that your little not only makes it through these 30 weeks but also is blessed with a happy and healthy long life ahead of him.

I understand a mom's heartache, but hang in there. My thoughts and prayers are with you and your little one.

You guys are just amazing. You are dealing with a lot of information and a lot of stats. I just want to send you guys BIG HUGS! Happy Calm thoughts to you guys! One Day at a time, one breath at a time!

I am so sorry! I can only imagine the way you must be feeling. Who knew pregnancy could be so difficult? I just found out this week that there are complications with my pregnancy...nothing compared to what you are going through but still nerve wracking (especially since my first was picture perfect easy). I'll definitely keep you and your family in my prayers.

Prayers being said for you and that little one....thank goodness for a loving Heavenly Father that can give us peace during hard times....no words of comfort come to mind, but know that you are in my prayers and thoughts....

You and your family are in my prayers. I don't really know you, but I know Heavenly Father does. And he hears your prayers. You should contact the church in the nearby area, I'm sure they could help out with babysitting, meals etc.

Prayers and Love to you and the entire family!

I don't know you, but have been following your blog for a long time. I will surely include your little guy in my prayers, and I am sure God will listen. Just keep your faith and everything will be fine. :-)

You and your baby are in my prayers! I love you and I wish I was closer to help you! Let your Ward know they will help you as well.