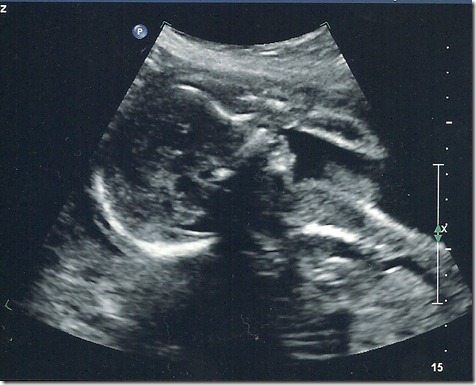 I wasn’t sure if I was going to share this, on this blog, especially since I haven’t once mentioned I was pregnant.  But whenever I have been reading a blog and then all of a sudden they just disappear I always wonder what happened.  If life threw them a little curve ball, or maybe they just got too busy.  Well life did throw us a little curve ball on February 3rd.

Psalm 46 “Be still and know that I am God”.  Also the song “Be Still My Soul”  is a great comfort to me, though I usually end up in a blubbering heap.

1. Be still, my soul; the Lord is on thy side;
Bear patiently the cross of grief or pain;
Leave to thy God to order and provide;
In every change He faithful will remain.
Be still, my soul; thy best, thy heavenly, Friend
Through thorny ways leads to a joyful end.

Update * we got our quick test back and they were all normal!  That of course doesn’t rule out a lot of other chromosomal problems, but a least it’s something positive.

As for the blog as you can imagine, I don’t exactly feel up to it right now.  I have been sewing a lot, I call it sewing therapy.  It actually helps me get through some hard parts of the day.  Because I’m a good enough sewer that the kids can actually wear the stuff I produce, but I’m not that good that I don’t actually have to think about it a little and having something else to think about really helps.

My thoughts and prayers are with you. You shared some inspiring thoughts and words, you impress me a lot. I am so happy you have so many wonderful people around you to help lift you up. Your blog will always be here, for now you be completely selfish in your use of it, only post when you need to and don't give one thought to your readers, we'll all be here :) Hugs.

so sorry you are going through this! Glad the initial results are good. Praying for you, the baby and your family!

What a horrendous thing to be dealing with! You and your sweet baby boy will be in our prayers, I hope you can feel some peace and comfort at this scary time.

My thoughts are with you and your family. Just take it one day at a time, and when that feels like too much, one breath at a time. *HUGS and LOVE*

I'm sorry for your struggle at this time. Thank you for sharing that scripture and song. It really is true that we are not in this journey alone. I always like to remember that we are not given more than we can handle WITH HELP from others and a loving Savior. Good luck.

So sorry for what you are going through. I'm happy that you are finding your refuge in God who knows your little son intimately, even more that drs.! Keep trusting in Him!

I just want to let you know that I am praying for you and your family. The Scripture and song you shared are very comforting. Blessings to you!

Praying that the Lord takes all of the troubles away and restores them with his peace that passes understanding.

I will pray for your family and your baby boy.

Sending hugs your way and really don't know what else to say other then I am thinking of you. You will be in my thoughts.

I am so sorry! Nothing is so scary as potential problems with a child. Just know that a world of miracles can occur for your little boy! Think positively and pray, pray, pray!

Big hugs to you and your family. I will keep you in my thoughts and prayers. andi

My heart aches for you. I'm praying for peace for you and healing for your baby.