Yet another bread recipe.  I have mentioned how much I love making bread right?? Well I do!  This is my own recipe. 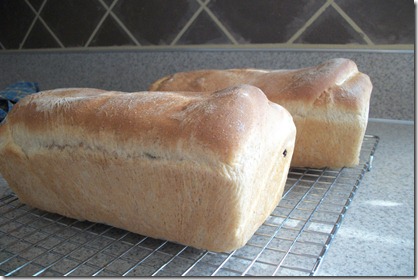 3-4 cups of flour (wheat, white or a little of both, today I used both)

1/2 cup of cinnamon and sugar

1/2 cup of dried currents ( you could also use raisins)

Place the first three ingredients into your mixer.  Then add 3 cups of flour, and the rest of the ingredients. Add enough of the remaining flour that the dough starts to clean the sides of the bowl.  Mix for 2 minutes.  When it’s done let it rise until it’s doubled in size.   Punch down and dump it out onto a floured surface.  Knead the dough adding more flour (if needed) until it’s smooth and elastic. Roll out the dough into a rectangle, like you would if you were making cinnamon rolls. Spread with a thin layer of butter and sprinkle with cinnamon and sugar and then with the currents.  Roll the dough up, (make it as tight of a roll as you can) like you would cinnamon rolls trying to keep the ends even.  Chopped the dough rope in half to form two loafs.  Place them in a greased loaf pan and let them rise until they are about 1 inch above the pan.  Bake at 350 degrees for about 30 minutes. Enjoy the heavenly aroma as it bakes in your oven.  Remove from pan and let cool on a cooling rack.  ENJOY!

I had little helpers today that totally squished the loafs before I could bake them, but they still turned out pretty good, and they taste divine. 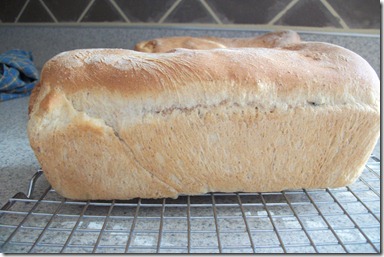 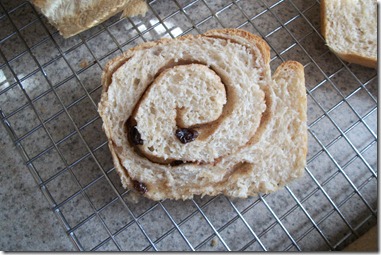 *sometimes when I need to make bread and I’m in a bit of a hurry I turn my oven on and set the bowl on the oven so my bread will rise a little faster.

Oh yum! This looks delicious. Thanks for stopping by humble homemaking. I am glad you found me! You have such a sweet blog. I am your newest follower. Feel free to hook any of your projets up to me weekend party if you want. The more the merrier. Take care. :)
Humble Homemaking

That sounds delicious. And I bet it makes the house smell great while its baking. You have such a wonderful blog. I decided to award you with The Versatile Blogger Award. Hop on over to my blog to claim your prize. http://diyhshp.blogspot.com